When looking at corn varieties and farming in southern Appalachia, there is no greater teacher on the subject than the Cherokee. Heirloom seed saver and registered member of the Eastern Band of Cherokee Indians Harold Long, alongside his wife Nancy Long, certainly have stories to share on the subject. “With seeds, there are so many different stories and they’re all unique and just  really interesting,” shares Nancy. It’s another way of listening to family history.” 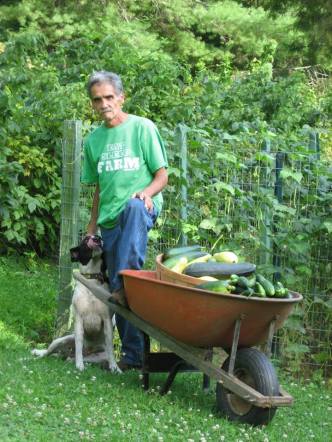 Now in their fourth year growing heirloom seed varieties on their 32-acre farm in Murphy, Long Family Farms and Gallery, continue that history by growing and saving the seed of a variety of crops–tomatoes, pole beans, a very rare North Carolina Candy Roaster pumpkin and yes, corn. In fact, many of you may be familiar with the Three Sisters, a farming system unique to the Cherokee, growing corn, beans, and squash or pumpkin in (selu, tuya and iya in Cherokee). These were all planted together as a cluster crop, allowing harvest of each on a timeline so that beans could be picked first, then corn and finally squash-some grown only to save the seed, some dried or ground to store for later and others grown for produce to sell at market.

“This year we’re growing this very rare Will West Long Corn seed, which came out of the Big Cove Community in Cherokee. We got this through trading with another seed saver after we spoke on a panel at UNC Asheville alongside Vandana Shiva’s talk in October of 2017, Nancy shares. “And we maybe got 150-200 seeds, so we planted them, and they’re doing good, and we’ll be growing them just to save the seed, not to eat.”

Last year the Longs grew Hickory Cane Corn, which they made hominy out of to grind into cornmeal in preparation for traditional Cherokee Bean Bread using a grinder borrowed from a neighbor. They’ve also grown Cherokee seed bead in the past, or Job’s Tears, which is “really like a grass seed. You can pull this little strand out of it and there’s a natural hole in it which makes a nice bead. So they use it for making necklaces and things like that. Harold’s sister would always make necklaces out of it,” she shares.

Harold’s family farmed in Cherokee on the reservation until his father passed away and the land was divided up, Nancy shares with me. Afterward, Harold and Nancy knew they would need more land to grow so they searched and found their now 32 acre home and farm in Murphy, NC, bordered on both sides by tribal land, “which makes Harold happy,” Nancy says. It’s also a bit isolated, she goes on, which is necessary for seed saving seed saving without fear of cross pollination if someone were growing a non-heirloom next door. “Harold’s family always grew their own feed, saved their own seeds and were organic before the word was even around. It just was what you did. We’re just happy to do it and glad that we’re able to. It’s something that we love and if you love something it’s really not work.”

**The story above was written for the summer edition of Food Life Magazine. This WNC-focused publication can be found in restaurants, markets and retail stores throughout Asheville. I encourage you to find a print copy as it’s packed with recipes (like Cherokee Bean Bread alongside this story), interviews with local chefs and restauranteurs and more + the foodie photography from Tiffany Welsh (@wellfedbaker will have you either breaking out your baking sheet or hopping into your little hatchback to run to the nearest local bakery)