Over a half century ago, Charlie Brown’s creator Charles Schulz introduced an elusive Halloween mascot into one of his beloved Peanuts stories, allowing the characters to balk and bicker and wander around with curious eyes awaiting the Great Pumpkin. It’s one of Halloween’s most treasured tales, with fans from five to 55 years old. And lucky for Western North Carolinians, the Great Smoky Mountain Railroad has integrated the story into an annual fall celebration, complete with a train ride, pumpkin patch, trick or treat street, and the entire Peanuts gang!

“Peanuts is a tradition and classic that’s been around for years and most people are very familiar with it,” Great Smoky Mountains Railroad Marketing Manager Sarah Pressley shared. “I’m 31 and remember that show from when I was a kid so it’s just really a timeless story. The oldest we can remember doing it is 15 years ago so it’s definitely been one of our longest running and most successful events.”

The fall fun begins from the train station in Bryson City where it’s all aboard to explore a pumpkin patch in Whittier, NC with hundreds of locally sourced pumpkins as far as the eye can see. During the 30-45 minute ride aboard the iron rails, the classic tale is read aloud to excited ghosts and goblins and families dressed in their ghoulish best. “Each year, the Great Pumpkin rises out of the pumpkin patch that he thinks is the most sincere,” Linus shares in the infamous story. “He’s gotta pick this one. He’s got to. I don’t see how a pumpkin patch can be more sincere than this one. You can look around and there’s not a sign of hypocrisy. Nothing but sincerity as far as the eye can see.” As travelers listen in, they’re each treated to a sugar cookie and apple juice until they arrive at the grounds full of all your fall favorite activities, including a hayride, marshmallow roasting, a coloring and activity station and trick or treat street.

“We encourage people to dress up each year to celebrate and it’s really fun to see how creative people get. We do have this one family that comes every single year and they always pick a theme and it’s fun to see how they champion a theme every year,” Pressley shared. “My favorite year was two years ago when they came as the Pirates of the Caribbean. The dad was dressed up as Jack Sparrow and they were all different pirates and his wife was Mrs. Swann. It’s really fun to see the kids grow and their costumes become more elaborate year after year.”

After picking out the perfect pumpkin, kids can wander through a 60×60 tent filled with tiny make-shift houses and doors awaiting their knock and the cry for a trick or a treat from the other side. And plenty of candy and goodies await them and parents can wander close by knowing their little ghost is safe. “All the kids get to go through as many times as they want and they can knock on the door. We have people inside the little doors but it’s safe and controlled and everything is already set up and ready to go and they can trick or treat just like they would in their neighborhood,” says Pressley. So not only are we providing a pumpkin patch but we’re also providing a fun place where it’s safe to do that.”

After an hour and a half of fun, families find their places aboard the locomotive and the iron rails that drastically changed the way of life in the mountains of N.C. in the late 1800s. The railroad welcomed travelers from the outside world into its forested cove in 1881, one year after the rails were extended to Asheville. It didn’t take long for workers to continue digging and blasting a path through the mountainside 100 miles further into the town of Murphy, which changed travel to and from the mountain oasis. Now a tuckered out Wonder Woman and Spider Man with their pumpkins in tow are one of few precious cargo being transported on these old tracks.

“Who doesn’t love the fall and Charlie Brown, pumpkins, Halloween, October and all the great things that come with that. So we’ve been fortunate to latch onto such a successful thing and reap the benefits year after year of having this great event. People are really looking for that family fun traditional thing they can do every single year, and it brings together so many different elements to make it really a perfect event.” 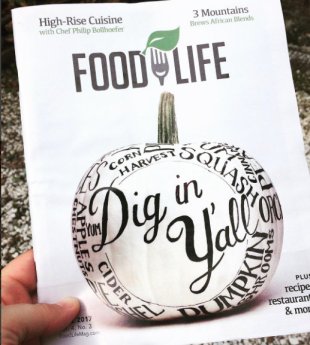 This event will run Friday-Sunday throughout the month of October with one event on Friday and two on both Saturday and Sunday. Tickets and train seat reservations can be purchased online at http://www.gsmr.com or by calling 1-800-872-4681. The full itinerary can also be seen on the website as well as the variations in seating options. This event does tend to sell out quickly so reservations are encouraged ahead of time. Ticket prices start at $38 for Adults (13 years old and up), $33 for Children (2-12 years) and complimentary for Infants (23 months and under).

You can find a copy of Food Life Magazine at the following locations.