26-year-old Georgia native and wilderness guide Seth Orme was out hiking in Franklin, NC one afternoon when he started picking up little pieces of trash along the way. The crew hiking alongside him followed suit and soon found themselves with a pound of trash collectively. Orme looked out as he stuffed the trash into his pack and thought about all of the litter living on our trail systems and wondered whether anyone had ever attempted to clean them. One year later, during the summer of 2015, he made the decision to act on that thought and set out on a journey with two friends to remove as much trail trash as possible while through-hiking. Little did he know he and two friends would collect over 1,000 pounds of litter from the Appalachian Trail together and continue with that mission on the Pacific Crest Trail this year. 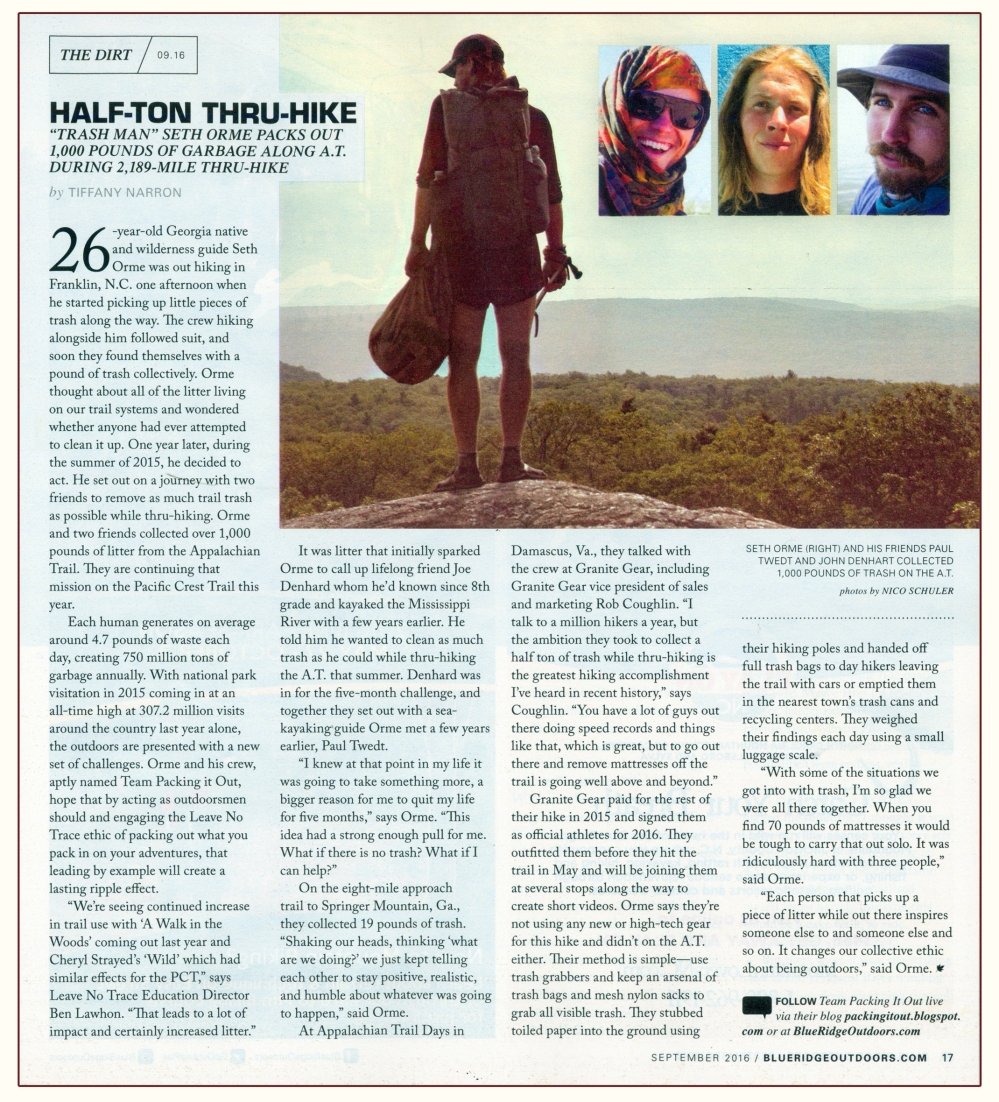 According to the Environmental Protection Agency, every human creates around 4.7 pounds of waste each day, creating 750 million tons of garbage annually. With national park visitation in 2015 coming in at an all-time high at 307.2 million visits around the country last year alone, the outdoors are presented with a new set of challenges. Orme and his crew, aptly named ‘Team Packing it Out’, hope that by acting as outdoorsmen should and engaging the Leave No Trace ethic of packing out what you pack in on your adventures, that leading by example will create a lasting ripple effect.

“We’re seeing continued increase in trail use with ‘A Walk in the Woods’ coming out last year and Cheryl Strayed’s ‘Wild’ which had similar effects for the PCT,” says Leave No Trace Education Director Ben Lawhon. “That leads to a lot of impact and certainly increased litter.”

Orme’s experience was effected by it which sparked him to call up lifelong friend Joe Denhard whom he’d known since 8th grade and kayaked the Mississippi River with a few years earlier. He told him he wanted to clean as much trash as he could while through-hiking the AT that summer. Denhard was in for the five-month challenge and together they set out with a sea-kayaking guide Orme met a few years earlier, Paul Twedt. This year Denhard is staying behind to continue his work as an outdoor guide in Brevard, NC. Chris Moore will join in his place, a professional cyclist and adventurer, excited to take off on the 2,650-mile trail from Mexico to Canada.

“I knew at that point in my life it was going to take something more, a bigger reason for me to quit my life for five months,” says Orme. “This idea had a strong enough pull for me. What if there is no trash? What if I can help?”

On the eight-mile approach trail to Springer Mountain, Georgia alone they collected 19 pounds of trash. A sopping wet sleeping bag greeted them at the trailhead and they all looked at each other shaking their heads, thinking ‘what are we doing?’ “We just kept telling each other to stay positive, realistic and humble about whatever was going to happen,” said Orme.

At Appalachian Trail Days in Damascus, Virginia they talked with the crew at Granite Gear, shook their hands and thanked them as they were all wearing their packs. The Granite Gear team invited them out for a beer where the guys shared what they were working to accomplish. “I talk to a million hikers a year but the ambition they took to go out there and clean up the trail and in doing so getting more than a half ton of trash while through-hiking is the greatest hiking story I’ve heard in recent history,” said Granite Gear VP of Sales and Marketing Rob Coughlin. “You have a lot of guys out there doing speed records and things like that which is great but to go out there and remove mattresses off the trail is going well above and beyond.”